Walk with Me: Frogtown: Adam #8 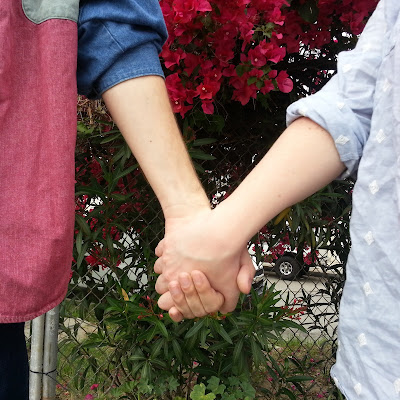 Everybody knows Frogtown is one of the best parts of the river. :) It's path has been there a long time and it is maintained and is scattered with adorable spots. After the highway noise of Glendale...it was practically idyllic in Frogtown. Adam picked me up from Ktown, just like he used to pick me up for work. We had so many lovely chats as we carpooled to work. Adam is an artist that started as a photographer and is now an artist that fits less into a box than he used to. Glitch art is what is thrown around. But what I like about Adam the best is that he is exploring and he doesn't seem to care what you artist box you put him in. I resonate with that feeling too. Artists are artists. Tools are tools. Use all the tools you want. Don't get stuck in categories or boxes.

I drew an orange sun like circle and a green line as my icon for this walk. And it really explains the calm and enjoyment I have with Adam. Everything was a smooth continuation from where we left off. The path was practically empty. We enjoyed this bit of calm in this big city. We may have spotted a spiritual ceremony across the river with a feathered staff and people walking in some meaningful path. That is the thing about Adam there is this mystic feeling to his cyber explorations. A bit trickster. A bit shy man. He looked the part of LA art student in the perfect retro long sleeved shirt and cool glasses. 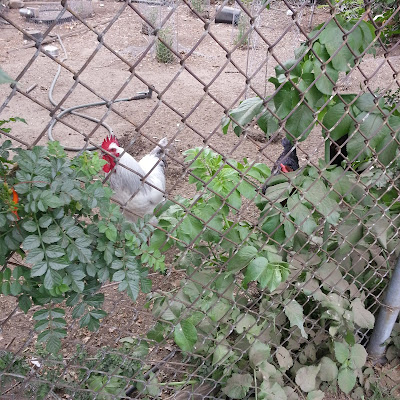 We walked by so many interesting homes and studios. With chickens. With a man repainting a large metal fence with enamel black paint. The river was the background against a thriving creative neighborhood. There were studios filled with cement statues. A studio or two that looked like movie props. Every backyard held something exciting. It was cloudy but hot as we walked and as we tried to take photos of our walk both of our ailing samsung galaxy threes gave us issues. I had to ask him to take photos as my phone froze, just to have it revive in time for me to snap our faces into memory. 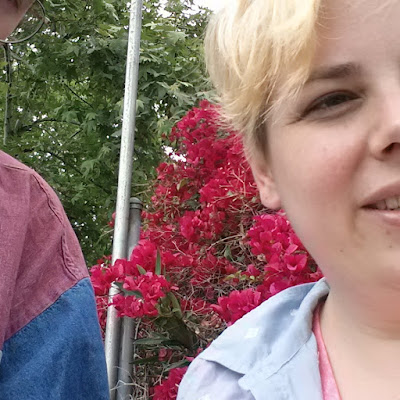 The neighborhood had so many colors of flowers along the path.  Adam had never seen the river though he has been in LA for 4 years. That is the thing about LA. So much to discover and nature seems to take a back seat. Or at least the more momentous nature seems to be where we go. The ocean. Adam loves the coastal towns. Or the mountains. Not this dinky river that runs straight through the city.

What is intresting is right now the river is a rocking river. With all the rains LA has had it is completely different from when Adam and I walked it. I would love to get some photos of what Frogtown looks like right now. 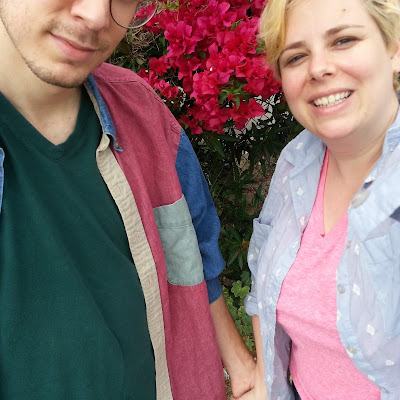 Thinking about this walk. I am filled with hope. Cause I have no doubt that Adam will teach art and continue to be an artist his whole life. It gives me hope that I can manage the same. Adam is just as tired as I was in grad school. Just as "I have no idea where this is taking me." But knowing Adam and his many cities and his awesome art ideas. It makes me hope that we can keep struggling and making decisions based on the need to explore. The need to create. The need to be awesome people. Hope. Adam with his queit ways and his persistant art making and exhibiting is an inspiration to me. And he is cute to boot. :) His wit and humor are unique. He may look hipstery. He though, is the real deal, a genuine person with a heart of gold and creativity to spare. His ideas are his own and though a bit shy has no problem talking to people about art and technology or just about anything at all. Or at least he is that way with me. Ahhhhh what a great late morning with Adam on the river. 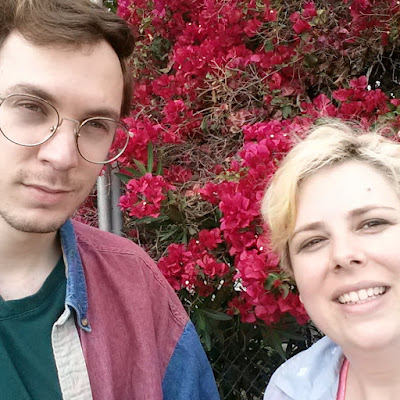 Posted by SweetPea at 6:19 AM No comments:

Walk with Me: Downtown: Cathy #7

Wow this is my 100th post. I am imagining confetti being popped from confetti guns above me as I hit post.

Things have been crazy in Paige land with my day job getting more stressful and more stressful. I have been working on the lino cut pamphlet book for this project and slacking on posts. As I sit here in Minnesota, I keep hearing the national news about the rains in LA. I must say it fills me with angst as I see all that potable water turning into a polluted mess as it streams into the ocean. I keep thinking CATCH THAT WATER LA. CATCH IT. TAKE ADVANTAGE of what nature is giving you. You were WAITING for water, now you are WASTING it. And it's that the main theme. Waste. The mask or the facade of a city as more important than it's structure.

Well, along came an article about a revitalization of the LA River http://www.kcet.org/socal/departures/lariver/confluence/river-notes/la-river-restoration-plan-unanimously-approved-in-dc.html. And I just thought to myself what would Cathy think of this article? Cathy is one of the people behind Play the River LA. She is one of the founders and of course that made me a little nervous to walk with her. But I had already had two walks that day and I just couldn't be so nervous when I was already so tired. :) 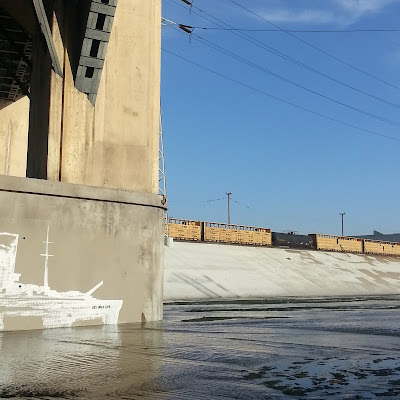 Cathy was nice enough to pick me up form the apartment I was staying in Koreatown. And we went right down town to the 6th St bridge. Walking with mothers, is a great thing for me. Because they never are self conscious. They know the power of hand holding. Cathy was full of inquisitive knowledge. As we talked around concrete, a movie crew, and up urine soaked steps. The conversation was a out a memorial that Cathy was going to. Skirting around the emotion of memory sharing stories. While both of us observing the forces of gentrification on a gritty downtown. 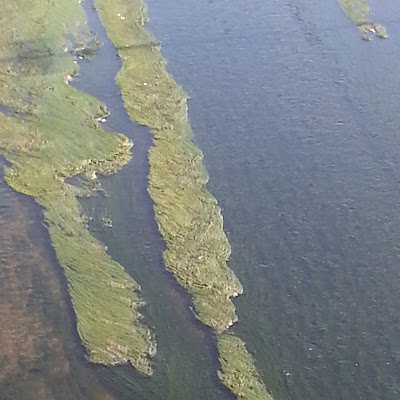 We walked down to the concrete river where tourists and LA-ers went to look at the river. She pointed out some beautiful graffiti. We mused on holding hands. Down the river there was a video crew IN the river bed. Cathy told me this is VERY common place that people buy permits to shoot commercials and movies in the concrete area that is the LA "river." Cathy knows a lot about different parts of the river and we chatted about those. Cathy wrote about how the environment downtown has little to do with the river. That you can't really define it has such, "'River' is more like it." 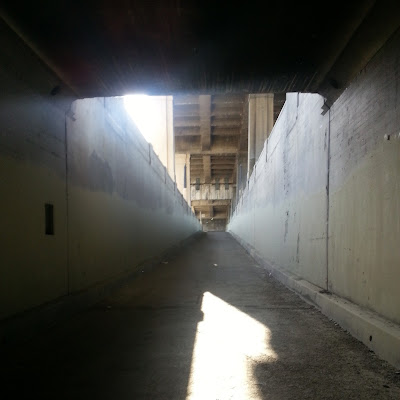 Unfortunately, I can't read what Cathy wrote on her piece of paper easily. But I can decipher that this was a more intimate experience than she was expecting. That holding hands broke through the stark industrial environment she meant to show me. I spoke freely of how hard it is to be a working artist. Cathy thought I still lived in LA. That I was just visiting Minnesota. And well, who knows...maybe I am. :) What is residence? What is it to be owned by a place? Cause in many ways I was owned and still am owned by LA. As a serious observer. As someone who likes to get mixed up in heady complex issues. There is no place like LA. And Cathy represented someone who is making it in that crazy landscape. With a family. A vibrant career. But that sure as hell means she has the same problems that all us struggling artists and creatives have. She and her husband though got lucky and bought property when two working people could buy something without having a million dollars.

Speaking of all that gentrification and fighting for a spot. After crossing over the bridge and coming down a different staircase we walked to a new development that is right downtown. You probably know the one. It is white and blue and HUGE. And it was like walking around a ghost town. It is this little oasis of gentrified "safe." We saw affluent folks driving and parking right by the door. (across the street there is street parking made specifically for the building) A few going out to exercise in the neighborhood. Cathy and I agreed on it's dissonance with the neighborhood. Cathy works with LAPD in Skid Row. (check out their work here http://lapovertydept.org/) A group I am very well acquainted with after living with Barbara T Smith and spending a few holidays or parties with Henriette and John. The work is heartening in a sea of not so heartening initiatives in Skid Row and the city at large. It may sound trite but that is when I knew Cathy was truly concerned and linked to LA. That she was all in, in making change for this big unwieldy city. She is passionate about the environment and about making LA a place that is for everyone. Even now, months later, I was impressed by her connection to a city that spits people out. That had spit me out. And I didn't want her to think me an impostor, just because I had left. I still care deeply about LA. So much so I make a bother of myself on social media about my thoughts on the LA River. I SCREAM about saving water and conserving. I am more connected to the art world there than in Minnesota 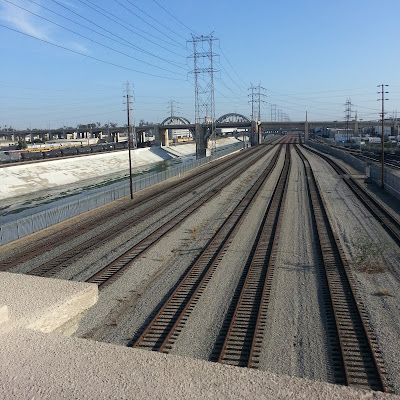 I was nervous about walking with Cathy cause I wanted to impress her. Instead, I was heartened to meet a woman living her passion. Finding a way through grants, hard work, and passion to make it work being a LA creative. As I make my life in St Paul, where things sure as hell feel easier, I congratulate Cathy for being an activist, a creative, a mover and shaker, a mother, and a genuinely nice human being. It was a pleasure to get to speak of life so bluntly. Cathy and I learned that maybe it isn't just about the river but the lives that make up the river and the bigger social issues that surround it. In the case of this river possibly choke and kill it.
Posted by SweetPea at 5:14 PM No comments: